Hi Flyers:    If you were not there today it would be difficult to tell. That is because we had 10 fliers out in this beautiful spring day.

We had so many guys flying that I’m not sure I have the count correct. I do know that Larry Anderson brought out a Phantom Flyer, Don G.

Anyway … Fr. Wayne, Dancing Bill and I filled part of the sky with DLGs while Art, Eddie, Larry, Don G., John, Bob G. filled the rest of the sky with electric and high-start launch big planes.

I was there for 4 1/2 hours. When I left guys were still flying.

Dy-no-mite day.  You should have been there.

Sorry for the delay in this post. It was indeed a beautiful day for winter flying Monday. Heck, it was a good day for flying in any season. Lift was so abundant it was almost boring because it was too easy. I was flying my hand launch Vortex 3 and was skying out regularly with ease. I think Larry and the others were actually impressed by what a little dlg could do. I was having six – ten-minute flights, seemingly at will. Not bad for something you just throw.

Anyway, I had taken a bunch of photos while I was there. Hope you all enjoy them.

Remember, our first contest is just a little over a week away. Can’t wait.

I made it out just before noon. Parking on the area stripped of sod in Field F along the main road worked great. They brought a semi out to where they were harvesting Field E and back when loaded. The tractor just barely missed our repaired areas at the corner as it swung wide to make the turn.

As I was about to put up, Don G showed up to trim out his V-Tail [Chrysalis?]. I pulled my Radian back out (now have CAM installed) and flew with him a while. He got it well trimmed, as the last flight while I was there he went beyond 10 minutes and worked his altitude up to almost 800 ft. He was tracking altitude above ground with an onboard GPS.

It was a fun day with winds varying from near calm to an estimated 10 mph. The thermal action was mainly above 200 feet, which made long flights with my DLG rather difficult as my throws don’t get much above 100 feet. With the Radian and Don’s plane climbing to 100m (330 feet) it was a lot easier, but we had to be quick about snagging a ride.

Field F still has a mushy area in the middle (seen visually, not by walking through it). I think Field B does, also, so be careful where winches are set ou! t tomorrow. They’re harvesting on Field E, with nearly all grass gone from the sprinkler to the road. Fields A and G are graded for planting, so we should stay off them.

We had a good amount of folks out today. We had Bob W, Art, Larry, Wayne, Duane, John, Jeff B, and Dennis came out later.

Winds were up and made for some interesting flying. We flew off the top end of C and D backing up to the levee between the two irrigation arms as the wind was from the SE.  C and D are the only fields left to fly off with a winch it seems as all the other fields are ready for planting or just harvested. Be prepared to go to Winfield or Foley for the first contest. If the wind isn’t coming in from approximately SE I don’t believe we can fly off the main field.

Wayne brought out the club retriever to test out and it worked well. The next test is on tall grass and we will see.

Jeff B was maidening his new 2M and it looked like it handled the wind well and was riding up lift the last time I saw it. 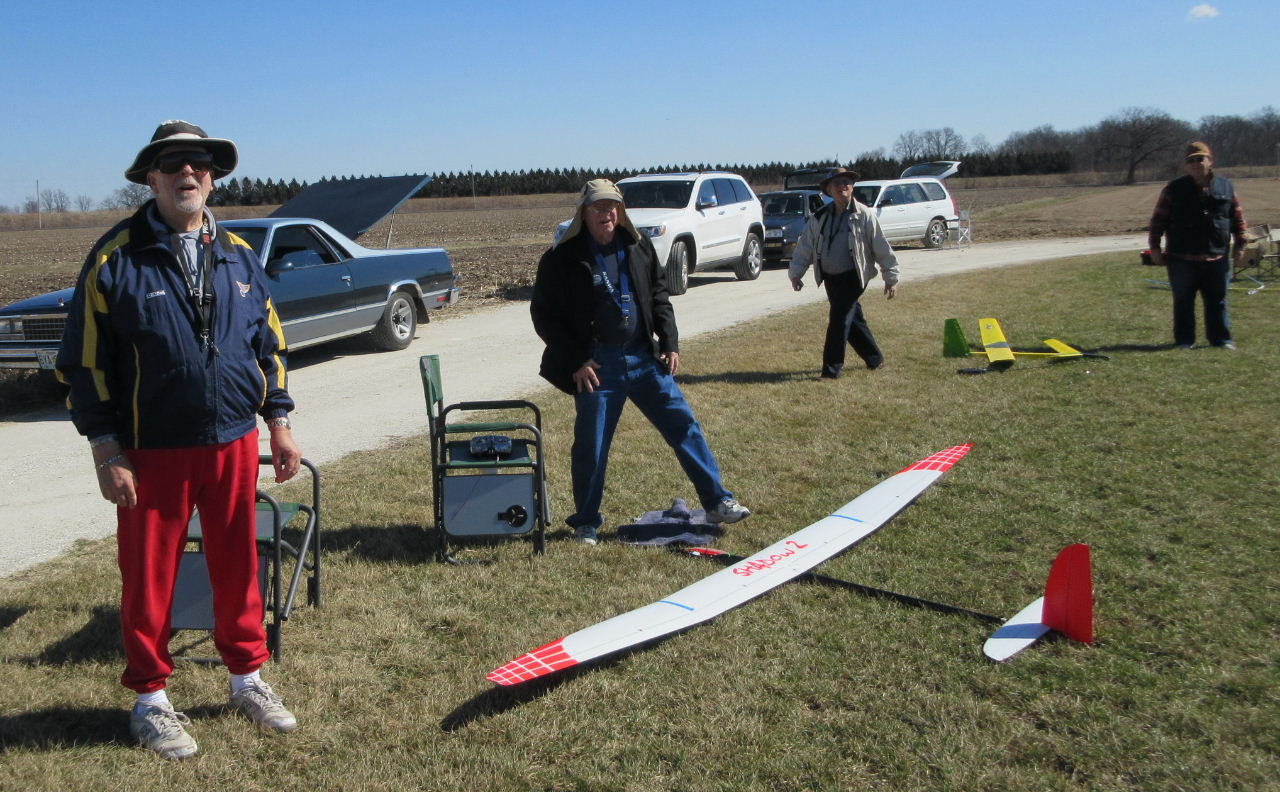 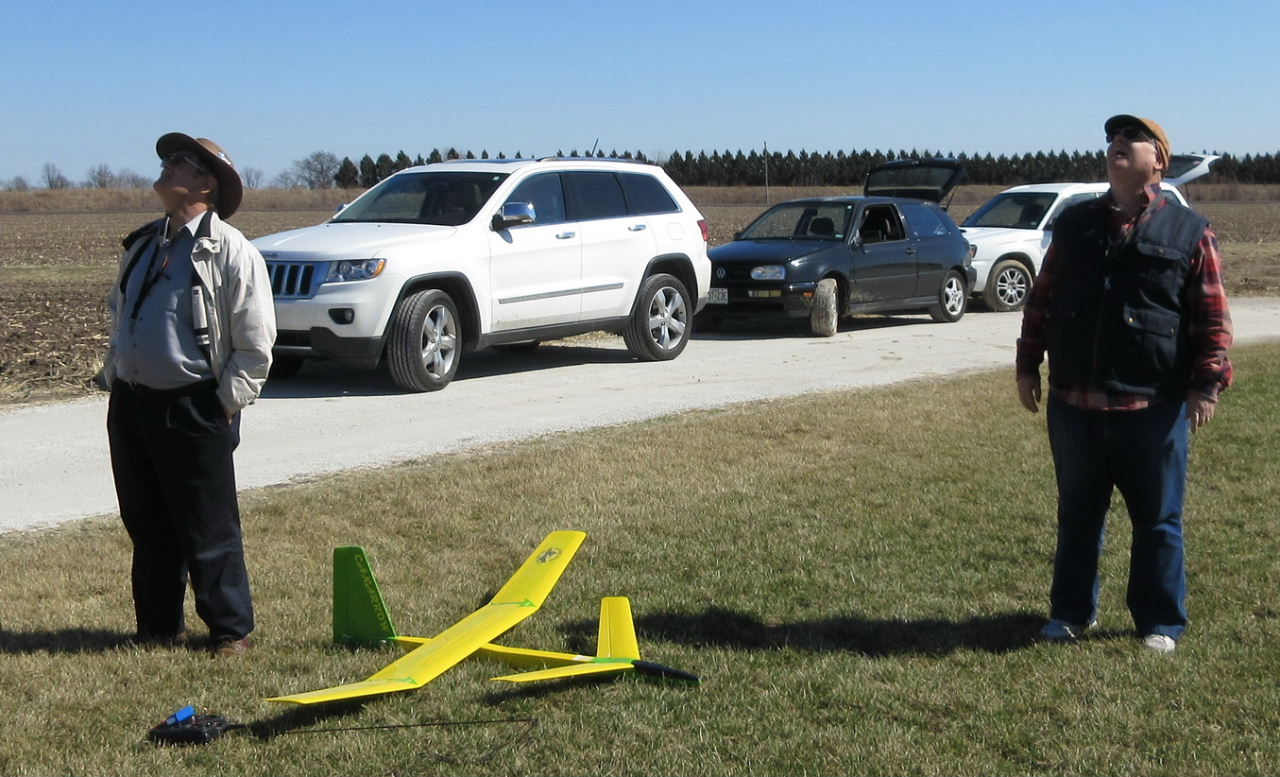 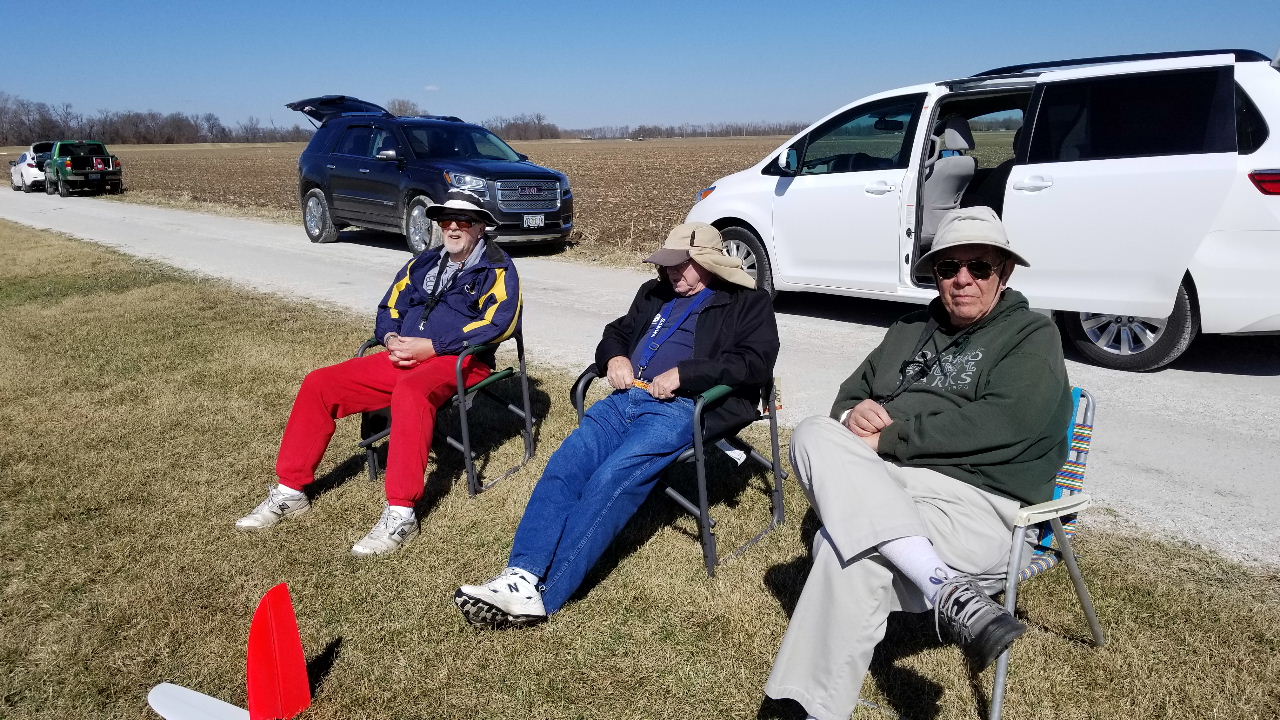 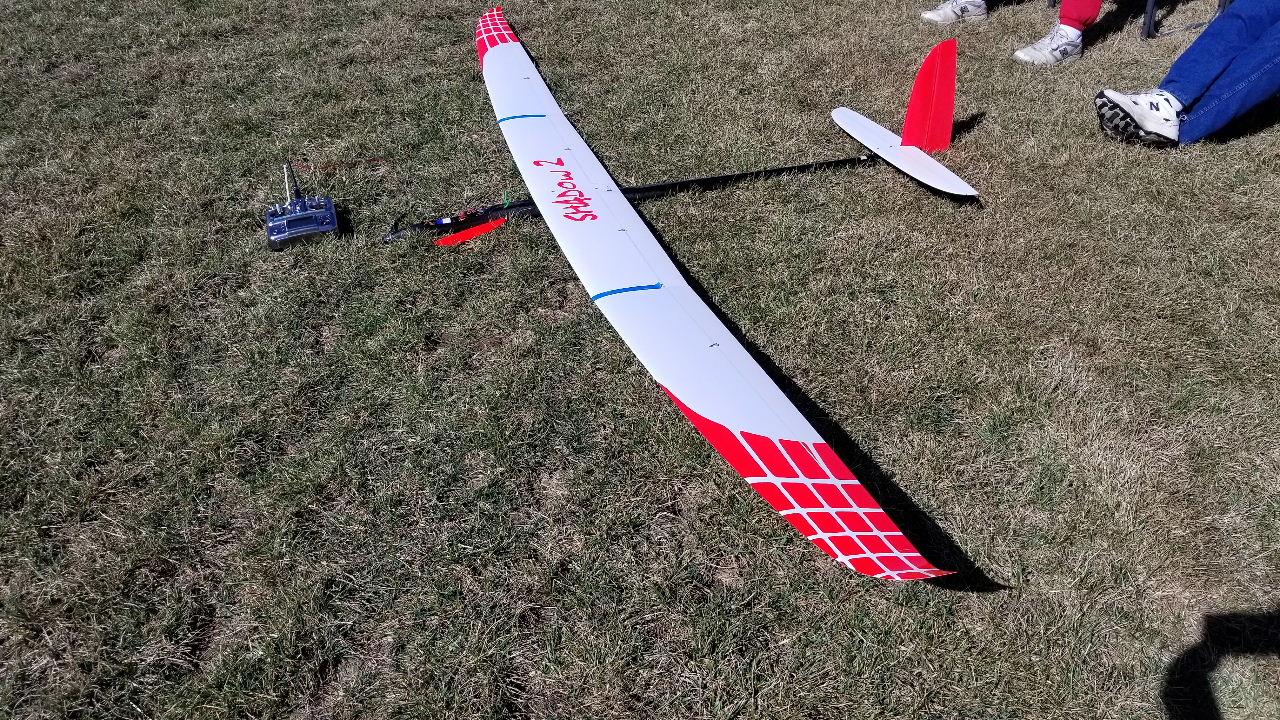 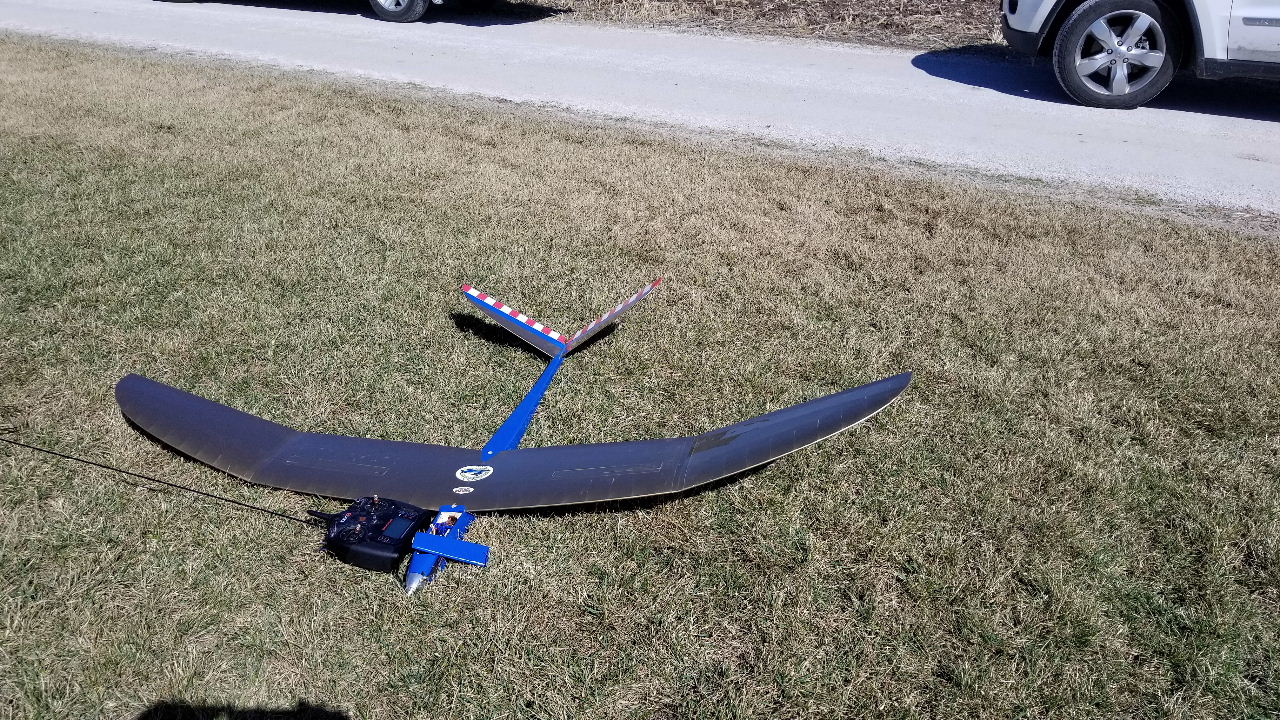 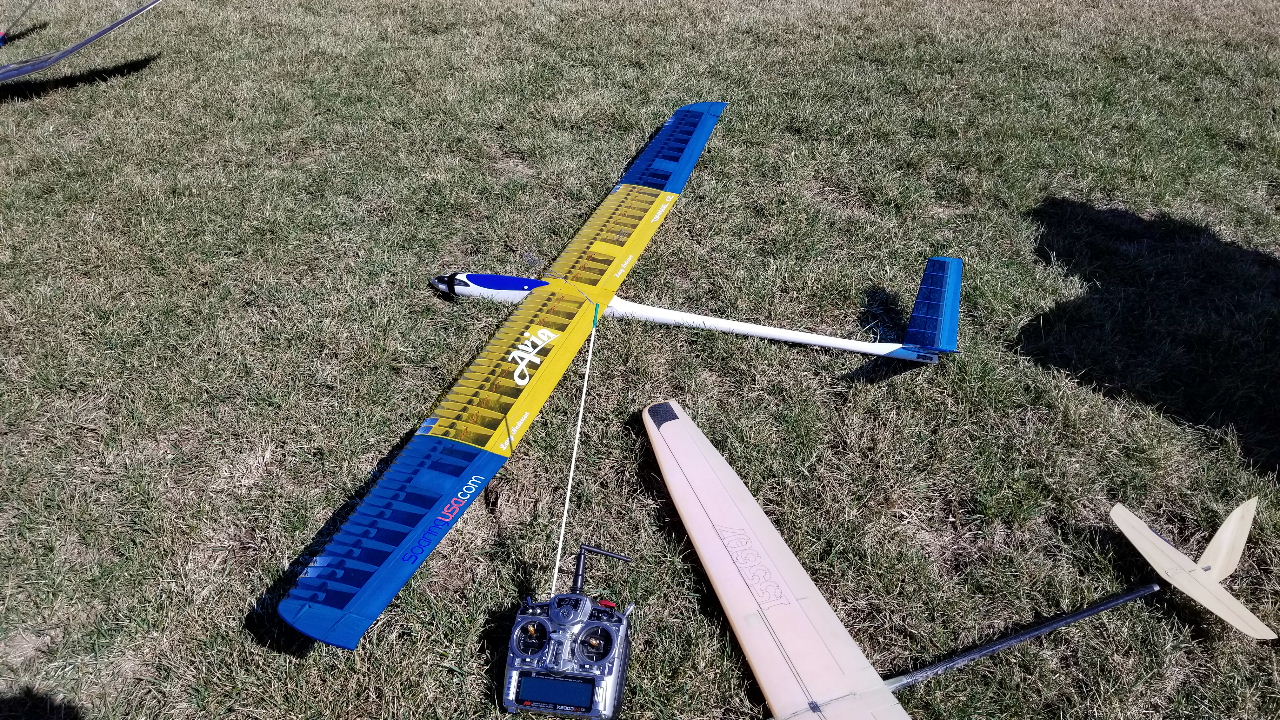 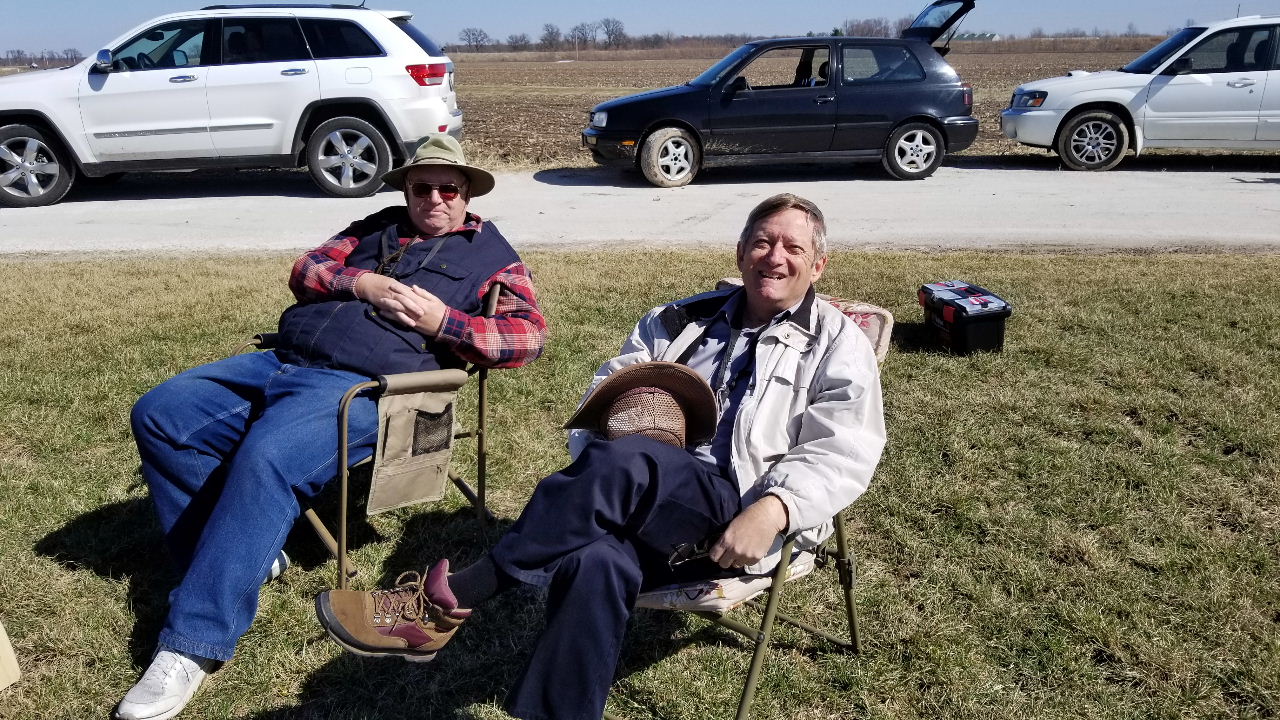 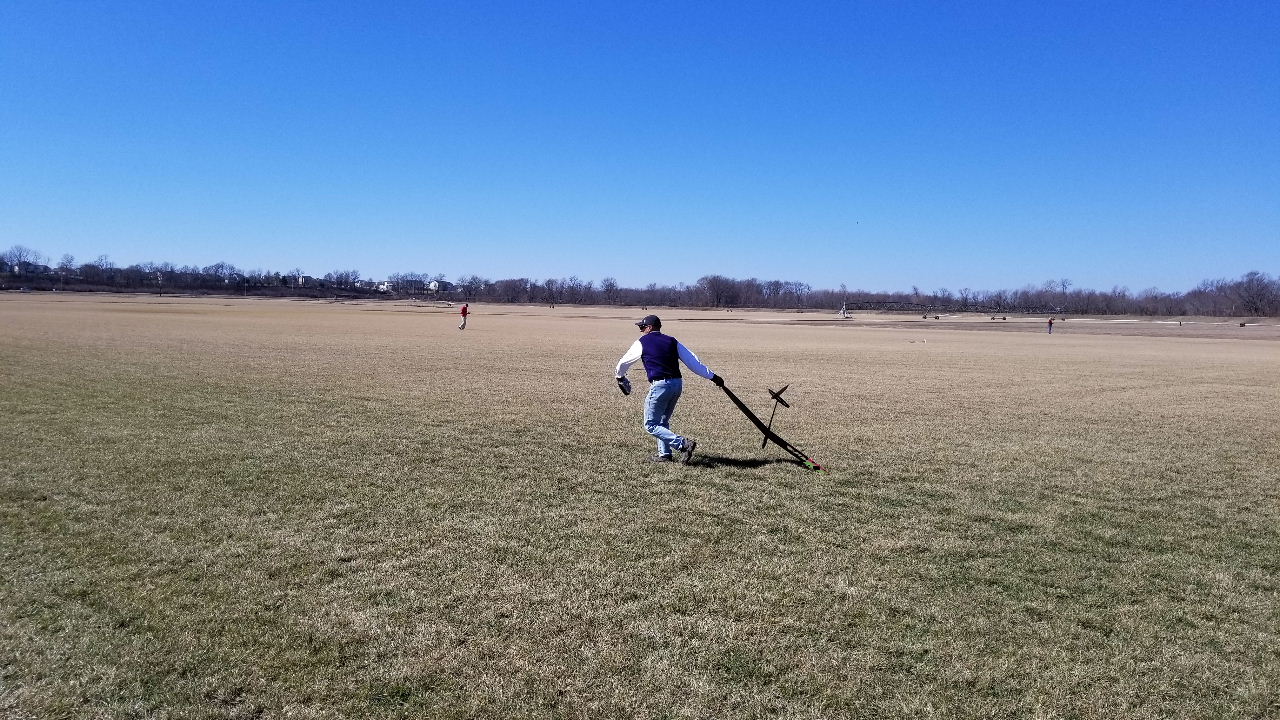 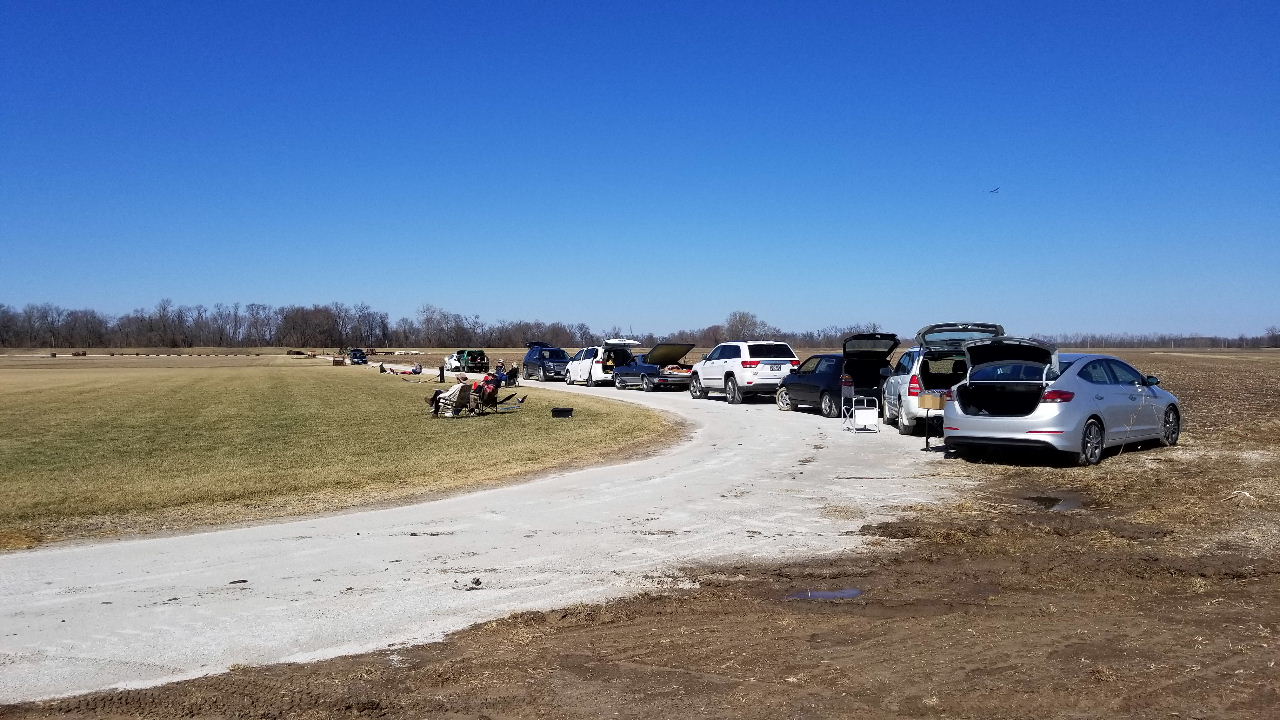