Last Thursday was a great day to go out and catch the noontime bubble. Art, Gene, Bob, Larry and I (Bill) did exactly that with our electrics. One of the photos is a flock of buzzards that came to join in on the lift. 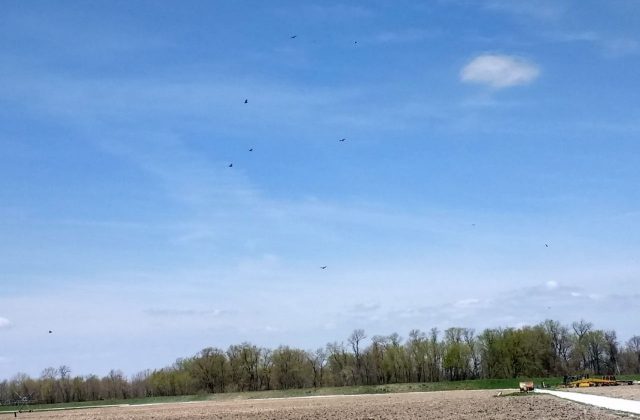 Wind was sometimes near calm. When the 5 mph or so winds came up, you could trust that there was rising air downwind. Temperature was comfortable in the 70″s.

We all had a problem avoiding getting locked into working an easily found thermal and getting too high/far before moving out of circling to come back and dump some altitude.

There was considerable flying with half spoilers deployed to dump altitude, for once a plane was up high it seemed lift was everywhere.

I suffered the only accident out of it. I learned (again) that a circling plane is easier to see than one coming towards me. I left a thermal too late and lost sight of the Radian I was flying. I thought I regained sight but was really trying to fly a glint in the sky. My holding moderate down stick to dump altitude got the real plane into quite a dive. Larry spotted what was happening and tried to help me out verbally, but I didn’t switch mental gears soon enough. The Radian crashed at high speed going nearly straight down. The fuselage was a wreck. The section between the motor and the wing split into several pieces, as the wing broke completely out of the fuselage. The wing caught the canopy, which broke and made gouges in the wing. The fuselage also cracked 2/3 of the way through in front of the tail. Luckily, I have a spare canopy (was an auction item [last year?]) and the fuselage is available as a spare part for about $20. 😎