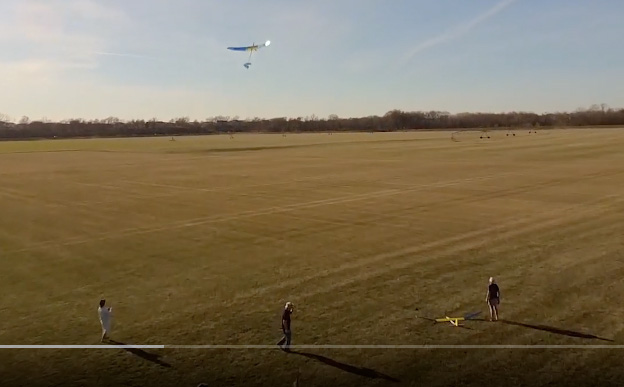 Last fall Bryan G., my brother, and I made an experimental video which I am happy to release to the club today.

In mid-November Bryan G. brought a high-performance quad copter with a 2.5k (between HD and 4k) camera to the main field. That night we laughed at the matter-of-fact beauty and an amazement of seeing our gliders in their own habitat – the air.

The video was remarkable. Bryan’s flying experience from racing quad copters allowed us to forget about the “camera” and “camera ship” and just be present observers watching these planes. In all of our years of flying – this was new.

At one point (in the unreleased raw video) Bob G.’s glider can be seen in a vertical dive with spoilers extended. The dive is jaw dropping as the glider dove under the camera view. The planes circle in the airspace above the field as if animals seen in nature. One launched and climbed from the ground to launch height. Jeff M.’s spoilers pop up here and there during launch as the air flows over the wing. What a sight! This simple procedure is given new life in this context.

Before the video could be released, we had a few questions and concerns. The discussions were held between us that night and then with a few members of the MVSA board. The second step was to gain permission from our field host.

The video was made in accordance with AMA and FAA safety guidelines as well as permission from each pilot prior to launch. The video also is protective of the neighbors to the field edited for a “we don’t look over the fence into our neighbor” guideline.

On December 20th we were give permission by our field host to use the video and today I’m making it public.

The discussions about the video and future production of similar videos with the club is ongoing. A few things are for certain. They will not be a common occurrence at the field. They will done with the blessing of the MVSA board using this one pilot. As of now, production is restricted to non-contest flights. The purpose of the videos will be used to enhance ongoing video productions telling the story of our hobby in St.Louis and the greater R/C Soaring community and those interested in it.